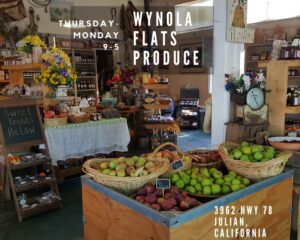 Julian is a haven for people who grow weary of the fast-paced, city-dweller’s lifestyle. And for Michael Bruton, newest owner of Wynola Flats Produce, that change could not be more welcome.

Prior to taking over the business two years ago, Bruton sold software. A good portion of his day was spent in a cubicle or home office, calling people and trying to “sell them something they may not want to buy,” he says. “It was fairly impersonal and distant.”

Now, he spends his days selling something everyone needs: nourishing food. The hallmark of his produce is that a majority of the items are grown locally and seasonally. He also tries to go organic whenever possible.

From stone fruits in summer to apples in autumn, the produce stand stocks a variety of products throughout the year, and Bruton knows what regions offer the greatest quality. For example, he prefers olive oil from Northern California and Italy. The stand also sells salsas, sauces, olives, pickles and so much more. He specializes in honey, too, and likes to take customers on what he calls the “honey tour.”

“People say all honey tastes the same, and I take that as a personal challenge,” he says.

The stand sells a range of local apples, such as the Jonagold, a cross between Golden Delicious and Jonathan apples, and Gravenstein, which are perfect for pies, cobblers and applesauce. Then, there are the Rome Beauty, Northern Spy and Arkansas Black varieties that make a trip to Wynola well worth the drive.

Along with a passion for the produce, one of the things Bruton appreciates most about his business is the face-to-face interaction with customers.

“It’s much more personal,” he says. “I know the locals on a first-name basis. It’s more relationship-based, and the product is much simpler. We all need food. It’s something very basic, sustaining and nourishing.”

In addition, he values the opportunity to offer healthier foods.

“The more you can consume fresh food that was grown close to you, the better you feel,” he explains.

As an added bonus, he says, “You wind up eating with the seasons.”

For him, Julian’s isolation and small-community feel only increase its charm.

“Except for people who make a run down the hill once a week, we have a small set of resources available, so I’ve enjoyed trying to stock things that people have requested,” he says.

As a result, he has worked to accommodate touch-less pickups and has even made food deliveries.

“It’s much more relaxed than other communities. I can’t imagine if you’re running a big store in a big town that you’d be texting people about drop-offs on your way home.”

The Lewis family has owned the land since the mid-1930s, and the produce stand has a history almost as long, stretching back to when it first opened in the 1940s.